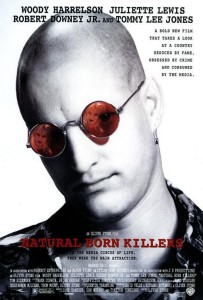 Natural Born Killers is so tailor made to shock that you are almost inclined to shut off the part of the brain that determines whether or not we should be offended. The frustrating part is that for the most part it is genuinely creative, even though it ultimately chooses to wallow in the same area that it tries to keenly send up.

The first ten minutes will define your enjoyment or righteous indignation level. Before Mickey (Woody Harrelson) and Mallory (Juliette Lewis) even start their hyper-violent serial killing sugar jag tour of continental America we have allusions to underage relations, incest and spousal abuse, all accompanied by a wicked sit-com laugh track.

But there are two hours yet to go, during which Mallory exhibits the mood swings of a toddler, and Mickey the dispassionate disposition of the finest mass murder has to offer. Innocents are killed, innocence is lost, and Oliver Stone does everything short of chuckle along to the silliness.

What could have been the stock standard examination of the public’s obsession with mass murderers goes even darker, with the sole intent to be to unsettle and disturb in a bizarre blood-fueled love letter to the ADD generation.

I’m now old enough to have seen all of this, but never so much of it in so little time. As an impressionable 20 something this had far more impact on me, though I fear now most 20 year olds have Youtubed and Tosh.0’d enough brutal stuff to make most of this a walk in the crazy park.

I didn’t really think this was all that necessary in 1994. I mean even then it wasn’t that hard to find enough violence to sate even the most bloodthirsty palate, but now an expose on the obsession with society’s dark side seems positively redundant.

As a work of cinema though Natural Born Killers is noteworthy at least. For those of an age that can process it for what it is, namely a film where adults make to shock other adults.

Final Rating – 7 / 10. An elaborate and audacious film crying out for your attention and praise, though only worthy of your curiosity and mild appreciation.