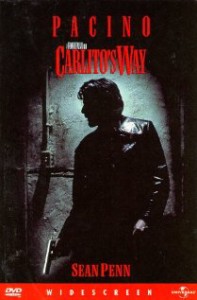 Carlito’s Way used to be a Way of crime. It is in this prior Way that Carlito earned a profile and a rep. He also earned a lengthy sentence in prison. A sentence only avoided on a technicality created by police ineptness. This technicality leads to release, but not until after Carlito’s Way too long speech to the judge, in which he smugly recounts the minor glitch that lead to his release, and a faux sounding declaration of eternal good behavior.

That was Carlito’s Way then. His new Way is decidedly more straight and narrow, leading to part ownership in, and management of, a swanky bumpin’ and jumpin’ 80s nightclub, where everything is run Carlito’s Way.

Unfortunately for him, Carlito’s Way demands loyalty and standing up for friends. This is very unfortunate because both Carlito’s relatives and old acquaintances are some degree of crooked, and all know very well Carlito’s abilities and skillsets, and therefore want him on their team.

Unlikeliest of all is white collar lawyer Kleinfeld (Sean Penn), a lifelong buddy of Carlito’s who grows increasingly enamoured with the Life most of his colleagues lead, and the white powder that many of them go to prison for.

So for the longest time Carlito wrestles with his Ways, the old Way and the new Way, with those closest to him seemingly intent on dragging him back to the wrong side of the law, and the law themselves watching on intently looking for signs of regression to former Ways.

It’s all very predictable and frankly avoidable for the most part. Eventually you either cut off relationships with those who would lead you in the wrong direction, or accept that you will eventually put your life, your hard won reputation, and your reignited relationship with Gail (a woefully miscast Penelope Ann Miller) your former flame at risk.

Carlito makes no choice, so Carlito’s Way becomes one of inevitability and eventual destruction.

If reluctant gangster movies are your thing then I guess this is the one for you. It’s funny that I thought Pacino had already had the chance to deliver his ‘Just when I thought I was out, they pull me back in’ moment. But here his ‘breaking the laws under duress’ thing seems all too unnecessary.

For a film made by one of the ‘greats’ in Brian De Palma Carlito’s Way is riddled with continuity errors; one minute I’m holding the drink, the next split second it’s in my other hand, now it’s on the table, now there’s no drink to be seen.

As mentioned the supporting cast have issues of their own. As a teenager when this film was released the news that Penelope Anne Miller would be doing nude scenes was some of the best news in years. The reality is so different. She looks so uncomfortable in the scenes in which she is supposed to be ‘sexy and/or alluring’ that you want to urge her to put on some clothes and never try sexy or alluring again. Sean Penn fares better, his Kleinfeld is a coke head moron who makes drug fuelled bad decisions. When you are called upon to play someone this unhinged there are few decisions that you can make as an actor that would be deemed ‘too far’.

And of course then there’s Pacino, who is on autopilot here. After his wide eyed opening ‘I’m free and going straight’ speech, his Carlito calms right down and pares back the emotions until but two remain; ‘I’m happy I’m free and going straight’ and ‘why did you bother me when I was trying so hard to go straight?’. I find it hilarious that he is able to play any ethnicity just because. One minute he’s Italian. The next Cuban. Here he’s Puerto Rican. In reality though he’s simply Al Pacino. This is the same logic that allowed Samuel L Jackson to play a golf playing, kilt wearing Scotsman.

Cinema buffs might find the long takes, elaborate pans and nice sets interesting and rewarding, and I guess they are, but a great film they do not make, not without a more interesting plot that doesn’t feel like so many others – others I might add in which Pacino himself appears – and a film where the man alleged to be the most streetwise and logical can’t avoid constantly putting himself in peril

Final Rating – 6.5 / 10. Carlito’s Way is ultimately that of self-destruction, but not really in a Way that proved that entertaining.