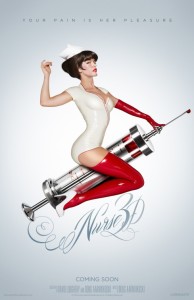 …turns out it does. And furthermore it turns out that I’m a card carrying member of said club.

Alas Nurse is beset with issues that render it both frustrating an ineffective.

The first is the anti-hero Abigail – aka the one on the poster – the one purpose picked to engage in the sex and administer the violence in equal proportion, under the clichéd justification that she was ‘done wronged’ in her early life.

Abigail is tall and slender, and possesses female qualities that the target audience would be only too pleased to see. And see them you will. Often. But her every tiresome line of Tarantino-wannabe dialogue is delivered in a woozy over-enunciating stream of bleh, a half-drunk drawl that is far more snoozy than sexy. It also doesn’t help matters that there are several moments where old Abby comes across as seeming like a female impersonator. Let’s just say she might be going for a younger, taller Catherine Zeta Jones, but the end result is far nearer Sandra Bernhard. And that might work. For you.

Can I just say that Sexy Killer was smarter, more creative, and yes, sexier.

In short; due to the afore-mentioned ‘wrong doning’, Abigail finds herself the self-appointed Avenger of flawed marriages. A seducer and slaughterer of stray men, with herself used as the bait. In essence she dangles the skinny mannish carrot and then bleeds any bunny stupid enough to fall for her under the dim nightclub lights. You cheat, dead meat, although it reeks of entrapment any way you look at it.

Of course Abigail is also a nurse by day, not that this seems to mean much more than the chance to wear the Victoria Secret designed uniform. Abby covets Danni (Katrina Bowden – a far more apt choice for the lead if you ask me), and spends the entire movie attempting to prove to her – and us – that her mixed up morals and bizarre antics are worthy of her admiration by killing anyone who dares go near her in increasingly uninspired ways.

Final Rating – 5 / 10. Nurse is violent and full of nudity, just as the cover and blurb would have you believe, but it is not nearly as sexy and noteworthy as it feels it is. Actually it’s kinda boring and very forgettable.