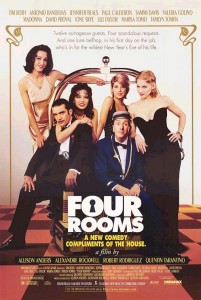 Words fail me. But this film fails everyone.

One would think that New Year’s Eve might not be the ideal first day on the job, especially in a hotel chock full of zany characters. Nonetheless that is what confronts Ted the bellhop (Tim Roth) at his new gig at the Hotel Mon Signor.

And what a day… what a laugh less, joyless, fucked up day.

First up, Ted finds Madonna and her topless poet witch pals, and must provide some… assistance with a key ingredient in their spell designed to awaken a bleach blonde goddess.
Secondly, Ted finds himself trapped between an accusatory husband the the woman he is accusing of infidelity.

Thirdly, the highly string well heeled couple who insist that he babysit their hell raising kids so that they might have a night to themselves.

Fourthly and finally, Ted has the misfortune of finding Quentin Tarantino in top gear, modestly casting himself as a Hollywood megastar genius, as he settles a bet between he and a couple other drunken guys, one of whom is Bruce Willis.

I was going to point out that this is a collaborative effort between four (at the time up and coming directors, but then realised that none of them deserved to have their works identified, and more validly none of them should want this film publicised.

Ted the bellhop is no help either. Tim Roth plays him as a gibbering, prat falling buffoon who mugs and simpers through every segment of this greasy, cloying, self congratulatory mess.

There are directors who manage to make their outtakes and experimental efforts interesting, strangely enough Robert Rodriguez seems one of them, but even he fails royally here. This is sub outtake stuff, a painful stream of braincell killing disappointment.

If given the choice between watching this again and torture, I’d say “thanks for the option and bring on the bamboo splinters”.

While I try to throw a joke or two into proceedings when I can all of the opinions presented in my reviews are genuine. I don't expect that all will agree with my thoughts at all times nor would it be any fun if you did, so don't be shy in telling me where you think I went wrong... and hopefully if you think I got it right for once. Don't be shy, half the fun is in the conversation after the movie.
View all posts by OGR →
This entry was posted in Bruce Willis, Crappy Movies, Film, Movie Reviews, Superstars, The 7th Level of Suck. Bookmark the permalink.