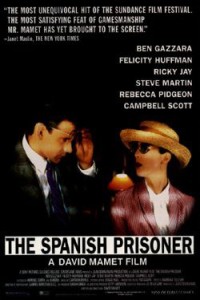 It is referred to as The Process. It will do things that you and I couldn’t possibly fathom in ways you can’t imagine, impacting the entire globe with its power and influence. That said we never actually learn what the hell The Process is or does. It involves numbers and equations though, so I stand by my non-understanding.

Joe Ross (Campbell Scott) has developed The Process while under the employ of Big Business. Joe was previously a mere cog in the machine, but he now realises that with the undoubted impact of The Process, his standing should be a little – no make that a lot – more enhanced in the near future. He attempts to carefully relay this thought to his superiors after a presentation outlining The Process is made on an idyllic Caribbean Island getaway… And conference centre. But the powers that be fob Joe with mutterings of “all in due time” and “good things come to those who wait”. They repeat these mutterings at every opportunity actually.

Meanwhile the chatty and winsome PA just allocated to Joe offers her inane support in the form of twee and occasionally naive comments – that could be misconstrued as pick up lines in the wrong ears – and Joe’s slobby workmate simply says to keep quiet and stay put.

Then a chance meeting.

Jimmy Dell (Steve Martin) is a smooth and charismatic businessman. A nondescript favour turns to a misunderstanding, and the apology-cum-square up dinner turns into a budding friendship.

Joe repeats his concerns to Jimmy, all without blabbing about the top secret The Process. Jimmy in turn doesn’t want to know about The Process anyway, but he imparts his wisdom and guidance for how to handle the situation, along with an offer to help in any way he can.

With every subsequent misunderstanding, misrepresentation and over-reaction, Joe feels he he spiralling further and further away from the driver’s seat. No longer is he waiting for the fortune to show up, but it seems he is rapidly the next to the next to the next in line, with his initial paranoia replaced by legitimate concern.

People Joe knows offer assistance. Still others show up to help. Bystanders in the shade suddenly look like shadowy figures, and innocent comments take on a sinister tone.

Is everyone who they say they are? Who is really on his side? Where do you turn when you’ve turned so often that you’re dizzy and uncertain?

The Spanish Prisoner is always compelling, if not always believable. You stop trying to second guess the plot, which is so circuitous and requires so many sliding doors moments that it feels as if even it doesn’t know where it is going.

The acting is mercifully kept low key, as the plot is bold enough without scene stealing turns. Unexpectedly enough, perhaps the most reserved performance comes from Steve Martin, notorious ham and comedic genius. His Jimmy Dell is a polarising figure, and the interplay between he and Joe Ross is central to the film.

Think of The Game with better acting and slightly fewer ridiculous coincidences and you’ll be on the right track. The Spanish Prisoner is by no means a classic, but it is intricately woven and remains entertaining for the full two hours. You could do a hell of a lot worse.

Final Rating – 7.5 / 10. Worth it if only to see Steve Martin in a different light, but this film would still be worth chasing down regardless.

While I try to throw a joke or two into proceedings when I can all of the opinions presented in my reviews are genuine. I don't expect that all will agree with my thoughts at all times nor would it be any fun if you did, so don't be shy in telling me where you think I went wrong... and hopefully if you think I got it right for once. Don't be shy, half the fun is in the conversation after the movie.
View all posts by OGR →
This entry was posted in B Movie Haiku Reviews, Film, Movie Reviews, Worthwhile Movies. Bookmark the permalink.