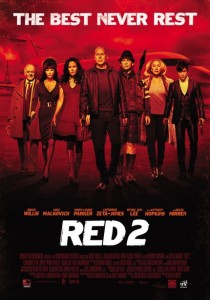 A large crowd converged for the early dinner special…

It was a long, long while ago, but I think that the first time a film introduced the concept of a ‘rapping white granny’ it was probably hilarious. Probably so unexpected and probably so unlikely and inconceivable to polite society, that it probably elicited surprised laughter…

The reasons are obvious. Rapping was – and is – thought of as the domain of young, dangerous, streetwise black men. Not white, creaky, precious, ‘$5 in a birthday card giving’ venerable grandmas.

Unfortunately this tired trick is still wheeled out all too frequently. Every second Sandler movie, every third Ferrell movie, every single spoof movie, with the only viewers laughing being the extremely easily pleased and the few newbies who are witnessing it for the first time.

Red arrived a couple of years ago, and critics and viewers released a collective gasp as respected, idolised and *swallow* respectable actors of a certain age wreaked elderly havoc in action scene after action scene, often at the expense of younger, more pert  enemies.

It was unexpected. It was fast. It was funny. It was pretty damn good.

It was also inevitable that it would be followed by a sequel.

With the Retired Extremely Dangerous Frank (Bruce Willis) finding his quiet life with new wife Sarah (Mary-Louise Parker) disrupted upon the return of manic paranoid Marvin (John Malkovich), the action goes global. Wikileaks has made their identities and past deeds public, and the government wants to silence them and any evidence or knowledge of their actions once and for all.

Helen Mirren rejoins Willis and Malkovich to reform the wheelchair warriors, an ageing Ocean’s Eleven of action. The film tries to keep things moving by injecting young blood; Byung-Hun Lee as a smooth but deadly Korean assassin, Neal McDonough as a ruthless agent, and (some crazy blood in) Catherine Zeta-Jones as a Russian agent from Frank’s past.

Despite the new notable names, the most welcome addition is Anthony Hopkins as a mad scientist locked away for decades. A man who may hold the clue as to the whereabouts of a rogue nuclear weapon that no one wants in the wrong hands. Here is a character  that couldn’t be further away from Hannibal Lecter.

Red is based upon a comic book series. In comics the bright drawings don’t tire. Tendons don’t strain. Hamstrings don’t ache. The Voltaren never runs out and no-one whinges when a store doesn’t accept their vouchers. This film is showing the signs of age.

Unfortunately while Red was a well made novelty the first time around. This time the energy levels are as high and genuine as Grandpa after dealing with the grandkids solo for an hour. Suddenly the joints seem to have tightened up, the throwback verve is a little more forced, and the urge to find a comfy chair is rising.

Final Rating – 6.5 / 10. The body count remains high, but this rapping granny has been done before.

While I try to throw a joke or two into proceedings when I can all of the opinions presented in my reviews are genuine. I don't expect that all will agree with my thoughts at all times nor would it be any fun if you did, so don't be shy in telling me where you think I went wrong... and hopefully if you think I got it right for once. Don't be shy, half the fun is in the conversation after the movie.
View all posts by OGR →
This entry was posted in Bruce Willis, Film, Movie Reviews, Superstars, The Grey Area. Bookmark the permalink.