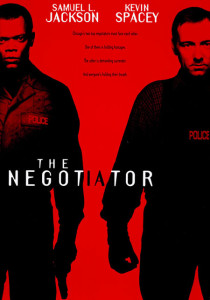 Danny Roman (Samuel L Jackson) is a police interior decorator… Wait. The other one. Police negotiator. He is the best of the best in Chicago, responsible for saving many hostages even though his superiors lament his constant backtalk, flouting of the rules and etc… let’s face it we’ve been here before many times.

But once a whistleblower alerts him to rumours that dirty cops at every conceivable level of authority are responsible for embezzling millions from the police pensions and even murdering curious parties to cover their tracks, Danny pauses to think what must be done.

Too late. Danny should have realised sooner that bad guys willing to kill might consider a little light framing as of scant concern, and he finds himself arrested on trumped up charges that a six year old could see through. One clumsy hubbub later though and Danny has hostages and an agenda.

So the obvious question is who will negotiate with the negotiator? Kevin Spacey will that’s who!

Spacey is Sabian, the other best of the best. Danny rationalises that as a negotiator he must be clean and above reproach. Probably. Regardless of the reason he and Danny end up talking a lot and trying to one up each other, no doubt using the exact same rule book that they used to get the job in the first place.

While Danny strives to find evidence to absolve him from the allegations, Sabian deals with the cops on the outside who want in, some of whom would rather see Danny dead than imprisoned.

It’s all very complicated but ultimately like watching two colleagues in an occupation different to yours ‘talk shop’. Momentarily intriguing but ultimately mystifying and/or dull.

Not much more than that really. Sam gets his yell on a lot. Spacey gets to do the ’tilt head to the side’ thingy that seems to be his go to move, and in between we must wait out an interminable hostage situation with a few feeble twists.

I seem to recall that The Negotiator was a big budget disappointment. I don’t really care how much they spent, so long as they know it was all wasted.

Final Rating – 6 / 10. This film held my attention hostage for two hours. None of the hostages survived…

1 Response to The Negotiator (Review)