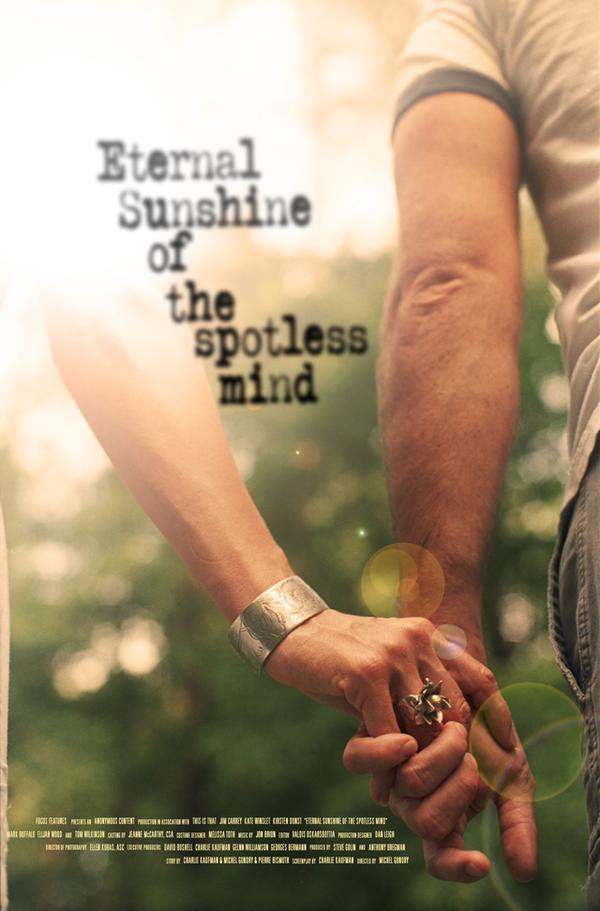 Joel (Jim Carrey) is at the train station awaiting the next silver metal chariot to speed him to work when he abruptly has an urge to be somewhere else. This is very unlike Joel. A randomly chosen alternate train has him on a beach, where the winter breeze brings chills and sand granules.

Here he meets Clementine (Kate Winslet), though it is more accurate to say she forces him to meet her.

Clementine is as brightly garbed, badly dyed, eccentric, bold and strange as… well as Joel is the opposite of all of those things. Her unfettered boldness circumvents his almost chronic introversion, and she cheerfully bullies her way into his life.

The two move in together and a relationship is instantly commenced.

Then one day Joel’s conservative nature, quiet demeanour and passive judgment of Clementine clash with her impulsiveness, love of alcohol and slightly abrasive vocabulary which seems to have no inner editing mechanism.

Faced with a moment’s doubt Clementine acts impetuously, and Joel not only finds himself unceremoniously single but somehow erased from Celementine’s memory altogether.

To this point Eternal Sunshine of the Spotless Mind was an endearing, creative and compelling film. Now it becomes something much more.

To delve further into proceedings might be disingenuous, but it’s fair to say that a sci-fi element is utilised here that draws parallels with the equally odd (and brilliant) Being John Malkovich. I don’t mean to insinuate for a second that either film seeks to steal or copy the other, but are uniquely original and equally worthy films in their own right.

Faced with his own heartbreak Joel seeks the services of the same memory altering company used by Clementine, though it is during this process that he realises that some memories – even sad ones – are worth holding on to.

There are unbelievably creative sequences where ‘memory Joel and Clementine’ seek to hide and flee through memories that they did not previously share, and a subplot that causes great consternation and distraction between the staff of the memory altering company, played by Tom Wilkinson, Mark Ruffalo, Kirsten Dunst and Elijah Wood.

Through these memories we share the best and worst of Joel and Clementine’s tempestuous relationship, and a few moments from earlier in their lives before they even met, which are again inventive and visually astonishing thanks to some forced perspective and the overall imagination and creativity of director Michel Gondry.

I tried to review this film a few years ago and stopped because I got too gushy and liberal with my superlatives. I realise that I have already over-stepped the mark above but I cannot describe this film without becoming excited with just how fresh and daring it is. Here is a romantic comedy with an underlying sci-fi theme that transcends both genres, meaning you don’t have to be a fan of either to find entertainment value.

The performances are also unexpected, held together by superb understated acting from Jim Carrey and an over the top audacious turn from Kate Winslet.

Sure the film isn’t without a few flaws and it might even benefit from putting a full stop earlier to subplots that ended up going nowhere, but Eternal Sunshine of the Spotless Mind is an incredible achievement and a film that defies convention and pigeon holing.

Final Rating – 9 / 10. Just watch it for yourself and forge your own memories.