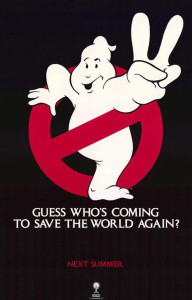 As chemists would tell you if they were honest, curing something isn’t a good long term business plan.

So when Egon (Harold Ramis), Ray (Dan Ackroyd), Peter (Bill Murray) and Winston (Ernie Hudson) quashed an unnatural uprising lead by demon dogs and a giant marshmallow man, it didn’t do much for the revenue of Ghostbusters Pty Ltd.

Now five years are those events, they fill their time as late night tv hosts, as freelance scientists performing research, and as uniformed punching bags performing for kid’s birthday parties. Actually they should have stuck with that, there’s huge money in kid’s birthdays now…

But then Dana’s (Sigourney Weaver) boss becomes possessed by a centuries old portrait of a vile villain who wants a child to possess so he can return to existence, and end all man life. Meanwhile New York City is gradually getting nastier thanks to the river of malevolent slime filling the sewers and subway tunnels.

Always the malevolent slime isn’t it?

Fire up the ghostbuster mobile. Strap on the backpacks and most importantly; don’t cross the streams.

Ghostbusters 2 benefits from familiarity. We already know and love the characters and get to sit back and enjoy as they revel in their surroundings. The foursome share a great chemistry, riffing against each other and the sheer ridiculous of events. Bill Murray takes most advantage of the situation, grandstanding throughout and stealing every scene in which he appears. Murray goes for every joke, every one liner, and most of them stick

With the core group already identified the bit characters are wisely pruned back a little, although Rick Moranis generates the film’s comedic high point in a bizarre 17 second legal argument that is as hilarious as is it is totally ineffectual.

Part 2s are a potential minefield. Especially when the sequel is to a surprise hit. Do you try to switch things up? Introduce new characters? Make an exact replica. Ghostbusters 2 essentially opts for the latter, and thanks to the strong cast and enjoyable ridiculousness created by the premise, it is all the better for it.

Final Rating 7.5 / 10. Ghostbusters is more revered and gets all the credit, but I’d much rather watch Ghostbusters 2 again.