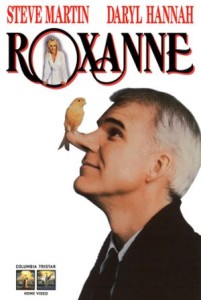 CD, a friend to the feathered.

CD (Steve Martin) is a nice guy, a beloved and universally popular figure in a small town. In fact CD has only one outstanding trait that sets him apart, but it is one that he is highly self conscious about.

By now you know what it is. If not check the poster above for proof of his proboscis.

As you would expect CD is used to cracks about his over-sized schnozz. Take a few seconds to think of jokes and japes about his sniffer, then understand that CD has heard decades worth of them, and frankly he doesn’t take criticism well… The central scene in the film has him drag out no less than 20 rip sorters at his own expense.

CD otherwise leads a normal existence, he spends his working days trying to turn a bunch of rank amateurs into a crack fire fighting squad – with little success – which in desperation leads him to hire outside help in the form of Chris the handsome young new crack firefighter.

Then Roxanne (Darryl Hannah) moves into town for the summer on a research assignment and complicated everything. Roxanne takes an immediate shine to CD, but her eye is drawn to Chris.

CD concedes the battle before it begins, rationalising that no pretty young thing could possibly choose him over a beefcake alternative, what with Chris practically being the very reason firefighter calendars were invented. Magnanimous to a fault, he decides that if he can’t find love then at least Chris and Roxanne should be granted every opportunity. CD decides to play the matchmaker.

So CD writes it, and even acts as a helpful ‘voice in the ear’ for Chris’ first face to face meeting with Roxanne. While the poetic prose has her heart potter-pattering, CD starts to doubt his plan as his heartfelt words impel the gormless Chris ever closer to the woman of CD’s dreams. And all Chris thinks about is getting in her pants (hey ‘romance‘ rhymes with ‘pants‘. Maybe Chris is onto something?).

There are a few very funny scenes in Roxanne, with Steve Martin always a drawcard. Without him the film would fall apart. Martin is not helped too much by the director, who switches the tone of the film frequently throughout. In an early scene CD fights two men who dare poke fun at him, and the entire hokey showdown is accompanied by ill thought out ‘boi-oi-ing’ sound effects and shameless over-acting, contrasting some of the more natural (ish) sequences that follow.

The film is charming and often funny but never hilarious, and in reality even the 20 joke self mockery isn’t the incredible moment it thinks it is.

Final Rating – 7 / 10. Not a film to thumb your nose at, Roxanne is well worth sniffing out.