Tears of the Sun (Review) 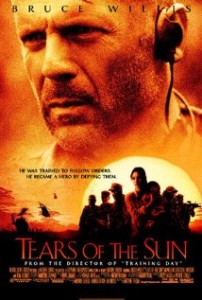 Bruce switches to ‘award mode’ with Tears of the Sun, though he still gets to kill an awful lot of bad guys in between maintaining a square jaw and a dispassionate demeanour. That’s two birds…

As Lieutenant Waters, Bruce leads a team of elite soldiers into civil war-torn Nigeria with only two directives; 1/ extract the VIPs (read: white people) before they are slaughtered, and 2/ leave everyone else alone amid the chaos. If they choose to lay waste to each other – and it is clear that they do – so be it.

Unfortunately for Waters, the primary target of the mission, Dr Kendricks (Monica Belucci), is reluctant to leave, especially when told that the locals she has spent so much time healing and getting to know, will be left behind, most likely to be slaughtered by the advancing rebel forces – who for once aren’t necessarily the good guys.

But with no room for several dozen Nigerians and the squad, Waters is left with a difficult choice, nearly as difficult as it is for Bruce to come up with a facial expression these days after decades of smirking. The crew load da choppa with the elderly and immobile and head off with the remainder on foot through the thick jungle. It is a long journey already without the dangerous heavily armed men in pursuit and the others already spread throughout other townships and we are not spared the scenes of atrocity that no doubt go on in these such situations.

Tears of the Sun is Predator without muscles, Three Kings without unmourned or creativity, Waters and his men must escort many innocents through perilous territory, pursued by hundreds of men for whom life is a trivial gift, and those that oppose them or stand in their way must be disposed of as bloodily and painfully as possible.

It’s definitely not always an easy ride, the first hour with all the unpleasantness might be the stuff that is harder to stomach, but it is superior to the ‘few vs thousands’ running shootout (that Hollywood can do in its sleep by now) that closes the film, replete with dust and blood covered survivors staggering arm in arm across the line of salvation. Directed with a heavy hand and not all that much inspiration by Antoine Fuqua, Tears of the Sun packs the punch required by such heavy subject matter, but without the flair or message that would elevate the material beyond merely decent.

Final Rating – 7 / 10. Like the characters in the film, Tears of the Sun tries to cover too much territory and ends up a little out of its depth.