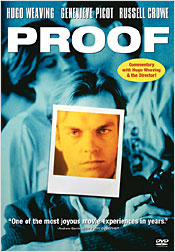 Proof is proof that you don’t need a big budget or an elaborate premise to make an effective film.

Proof is proof that Hugo Weaving can act without resorting to pretentious voices and annoying caricatures.

Proof is proof that Russell Crowe has a presence in even the most low key roles.

Martin (Weaving) is blind and has been since his childhood. He carries a determined ‘don’t pity me’ attitude, stubbornly does as much as he can for himself and is mistrustful of everyone aside from his guide dog Bill. Part of this is due to his late Mother, who found that lying to a blind boy was sometimes easier than telling the truth, and partially due to his part time housekeeper Celia (Genevieve Picot) who stirs Martin mercilessly and deliberately moves the furniture as she leaves so that he might stumble over it later.

When Martin bonds awkwardly with happy go lucky restaurant dishwasher Andy (Crowe) over a not-dead cat, he tells Andy why a blind man might carry a camera around taking random photos. Martin explains that even though he cannot see the results of his snappery, he feels that the photos are ‘proof’ that what he thought, experienced or felt, actually happened.

Martin asks Andy if he might be trustworthy enough to describe the photos to him, so that can label them in Braille and retain as evidence, validation of earlier events.

Andy is intrigued by this defensive and often abrasive blind man, and as mentioned above he is an amiable sort, so he agrees, and over time the duo develop a cautious friendship, with Andy taking Martin to the drive-in (Martin’s other senses are fine) and dropping in to his home for visits.

Which is where Andy first runs into Celia.

Proof tells the tale of two very lonely people who both use cruelty as a defense mechanism for fear of being hurt themselves, and a nice young defenceless bloke who can unwittingly lead all three to confrontation.

There is a plot development about half way through the film that essentially drives the events of the second half, though in truth it rings a little hollow. Besides this the film is unassuming and well acted, an examination of friendship, trust and betrayal, without any of the normal heavy handed Hollywoodisms that usually accompany such concepts.

Final Rating – 7.5 / 10. A quality Australian drama with a couple of young actors who would go on to far greater things.