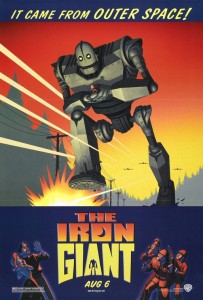 The Iron Giant might not be of the same ilk as the Pixar films in terms of quality, but it is better than your Madagascar’s, Happy Feet’s and the countless other animated crapfests that pop up annually for a two week cash grab before returning to anonymity.

I’m not suggesting this film should be immediately elevated to exalted status though, just given more respect and recognition than it seems to garner.

It is 1957 and the globe is gripped by xenophobic paranoia. Kids in schools are being taught the stop, drop and roll equivalents for nuclear attack and the army stands on the razor’s edge just waiting for a sneeze or cough to inform them that the country is at war.

Meanwhile life goes on in. Small town waitress Annie Hughes (Jennifer Aniston) works double shifts to feed herself and her young son Hogarth – who she actually likes despite labelling the kid ‘Hogarth’ – who leads a typical kid’s fantasy life of imagined ray-guns, race cars and giant robots. Only the giant robot proves to be decidedly unimaginary…

Despite being some 60 feet tall and weighing several tonnes, only Hogarth sees the Iron Giant in the woods, even when he sets to an electrical power generator creating explosions and chaos. Hogarth befriends the giant machine anyway and, after sensibly guessing that his Mum would lose her shit should she become aware of it’s presence, stashes him away until he comes up with a better idea.

The robot is massive, high tech and not of this world, it’s parts able to detach and reattach if convenient or if they are broken off through damage. It also eats metal, lots of metal, which leads Hogarth to hep cat Dean’s scrap metal yard, where Dean uses the pieces of scrap to make cutting edge artpieces that it appears no-one else wants. Dean is understandably surprised to find a 60 foot tall behemoth plonked in his yard eating his materials, but he is so hip that he lets it all slide…

However you can’t destroy power generators and ea cars without someone taking an interest, and when government agent Kent Mansley arrives asking all sorts of questions, Hogarth finds it difficult to continue suppressing the existence of his big buddy. Even harder when Mansley moves in to the Hughes’ spare room so that Annie can make some extra cash.

The action heats up once the Giant becomes public knowledge, especially when it becomes evident that it is pre-programmed with certain automated responses depending on the situation. You can imagine how a twenty metre tall well equipped machine handles having guns pointed at it…

The army doesn’t need much prompting to do just that, and here is another disturbing film that only solidifies the ‘shoot first’ reputation held by Americans, often proudly.

The Iron Giant is amazingly well drawn and well plotted, with a few decent jokes and sightgags for the kids. Only here is where the problem for the film lies; The Iron Giant is definitely not meant for kids under 8, while rules out the Pixar audience, and the message of non-violence would probably wash over an eight year old anyway. With 13 year olds nowadays (apparently) already into Saw and its peers, that leaves a film trying for the non-coveted 9 to 12 demographic.

Furthermore I’m frankly confused as to how this really means non-violence, given that the robot was just as responsible for the violence anyway. I mean he didn’t point the gun, but he sure fired back pretty quick. Maybe in reality the message was really ‘an Eye for an Eye is only OK if you don’t know you’re doing it’?

Final Rating – 7.5 / 10. Put another way, I have a 6 year old that I love introducing age appropriate films to. I am not sure when that might be for a film like The Iron Giant, this confusion might eventually cause me to skip it altogether.

And I like the film. So perhaps it’s really not that surprising that it failed to make money.