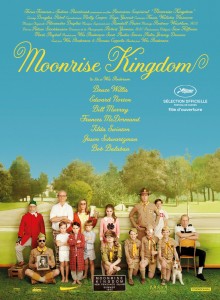 Moonrise Kingdom, like many Wes Anderson films, isn’t a drama, nor an action movie, nor a fantasy. In fact trying to force it into a genre is both confusing and disingenuous. If I was to try to put a reason behind this film’s existence it would be to elicit a smile from the audience.

And while I rarely laughed, gasped or thought too deeply about the events and happenings in this film, I smiled often. So I guess it’s mission accomplished…

In Moonrise Kingdom the Bishop house is a huge three level building on Penzance Island, with nooks, crannies and special purpose rooms scattered through the building – perfect for your inquisitive minds to explore. Lucky it is then that Walt (Bill Murray) and Laura (Frances McDormand) Bishop have four young pre-teens, three boys and a girl.

As always it is the girl that causes the trouble.

It is 1965, and Suzy is a prim, proper and book-loving young 2000s girl. She is also headstrong and seems to yearn to fast track her development through the awkward teens so that she might extricate herself from the personal hell she feels is her childhood home. She also has extreme anger issues.

So after a chance meeting with a young boy leads to a stream of pen-pal letters that culminate in the young lad running away from the local ‘Khaki Scouts’ troop to ‘elope’ with his dream girl – Suzy jumps at the chance. This despite the young boy Sam being a smarmy little awkward git. 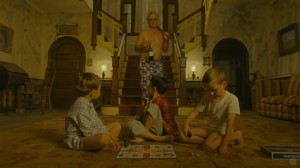 See what I mean about the people in the magnificent Wes Anderson houses?

Sam and Suzy love each other, or at least really want to believe that they do. They also want to do what only their burgeoning hormones actually hint at, leading to an awkward scene where Sam casually paints Suzy on the beach while both sit there in their undies, before they decide that such a situation demands more…

The relationship is tender and sweet and strange in only that way that Wes Anderson seems to have mastered. You alternately loathe these precocious kids then hope that they manage to find a way to stay together in a world that doesn’t yet think they are ready. (And by the way they aren’t.)

As with all love stories this one does not go smooth. Hot on the heels of Sam is Scout Master Ward (Edward Norton) and the rest of Camp Ivanhoe, and joining the Bishops in the hunt for Suzy is local police chief Captain Sharp (Bruce Willis) – who has been carrying on a secret affair with Laura Bishop for some time. Oh it’s all so delightfully quirky and complicated!

Moonrise Kingdom is less chintzy and wilfully kooky as previous Wes Anderson films (Royal Tannenbaums anyone?), though it isn’t noticeably better or worse for it.

Final Rating – 7.5 / 10. After a million grabs from a million reviewers I expected it to be magical and life altering, and while it had its moments – and the music was as always, perfect – I couldn’t allow myself to become immersed in the crazy world of Penzance Island.

But even sans immersion I did smile a lot. You don’t always need ‘love’ if you have ‘like’.