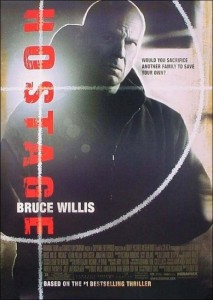 I don’t know if it is the presence of Bruce Willis that elevates mediocrity into worthwhile status, or if perhaps he is gifted a lot of decent but not great projects. Regardless of the truth Bruce stars in a large number of films that I would classify as worth checking out, but not much more than that.

Hostage is a prime example. A usually compelling thriller that has enough moments to grant it ‘recommended’ status, but equally more than a few moments that will have you scratching your head.

Jeff Tally (Willis) is an ex hostage negotiator, replete with the inevitable ‘one that got away’ story that opens the film. Fade to black. We meet Jeff again a little later, now a street cop in a quieter area trying to piece his relationships with a frazzled wife and distant daughter together.

Jeff’s Hero days are a distant memory, just like his hair.

That is until local well to do family man Walter Smith (Kevin Pollack) finds himself the victim of petty criminals venturing beyond the sandbox for the first time. Two brothers and a shady mate decide on a whim to boost Smith’s car, breaking into his heavily fortified home in the process. Then things get out of hand…

Tally is called in the second the woman hits the ground, unfortunately by this stage the trio of recently promoted dangerous criminals have realised they can use the homes state of the art security system to monitor and protect them from the outside forces, and they have secured both Smith and his two young kids, a blossoming teenaged girl and a young boy.

On the outside Tally rues the turn of events that put him in the hot seat, however once the big wigs show up and don’t take his advice he immediately takes his leave of the situation and heads home.

And this is where things get complicated.

Many of these films are simply cops vs robbers affairs, Hostage never settles for such formula, which is both a strength and a weakness at times. With the three hostage takers focused on outdoor events and saving their own skin, and Tally deciding that this situation requires him to discard the usual hostage guidebook, things get hot real fast.

It becomes increasingly obvious that all occupants of the Smith house are out of their depth, except Mars. Ben Foster might still not be a household name yet but I think he eventually will be, and this might be the film that announced him.

While the film is a little overly complicated and the plot has too many chefs stirring simultaneously, there are a few decent setpieces and the performances of Willis and Foster are more than adequate. It helps that the lads are perhaps the most inattentive hostage takers in history, with the boy especially wandering about aimlessly through a house with more secret areas and sneaky shortcuts than a hedge maze. (Seriously the air ducts are big enough to play cricket in.)

The first half of the film was strongly reminiscent of classic 80s Brian De Palma, with sweeping camera shots, overblown music and long slow scenes of people going about their day oblivious to what the future might hold. The second half got quite a deal more sensational, with some highly unlikely developments and a fiery conclusion.

Ultimately though Hostage ends up like so many Bruce Willis movies, you’re grateful it was worth the time, but leave wondering if it shouldn’t have been much better.