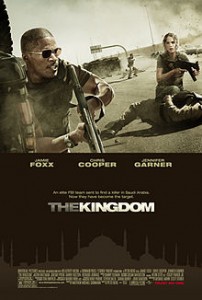 I’ve got a triple bill for you. Start with Fair Game, then try Jarhead, before finishing up with this film, The Kingdom. Six plus hours of unnecessary conflict engineered by our friends the United States government and brought to you with the corners buffed and the content made sparkly by Hollywood.

This just in! Americans like oil. Saudi Arabia? Has oil.

In the aftermath of the Bush family’s pet project Gulf War 2, American companies occupy small pockets in purpose built settlements of Saudi Arabia, from where they embark each day to work for big oil companies while the local Saudis look on. Not all are happy to have them hanging around…

Then abruptly a faction expresses their resentment more forcefully, and a large explosion leaves hundreds of US citizens dead. The FBI is instantly outraged and concerned, this was no mere act of terrorism, these were Americans!

But Saudi Arabia takes a firm stance and says “We got this!”, fearing an American investigation as an unwelcome interference inviting more reprisals, as well as being a sign of Saudi weakness. Of course Americans seem an untrusting bunch and demand a presence on the ground. They are allowed a team of 4, with 5 days to investigate and limited (read zero) support from the locals.

They are granted a Saudi babysitter, case cockblocker, escort, who initially proves as guarded and anti-American as the big wigs and local civilians called in to clean up the mess. Of course the can do attitude and general ignorance of local rules and traditions wins the man over, and he gradually allows the Fantastic 4 slightly more access and the right to be more than simply onlookers.

The Kingdom is far more than an international CSI procedural, after the build up there is plenty of action in the film, and although none of the foursome are described as the Rambo or Clint Eastwood type they all get the chance to go bang-bang.

With so many leads there is no real Star here, Foxx has maybe 26% of face time. The dominating theme of course is the USA overcoming Xenophobia and protecting their own.

Final Rating – 7 / 10. Despite the overt parochialism and the fact that I probably won’t watch The Kingdom again, it was worth one look at least.