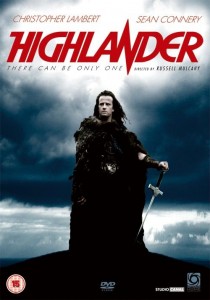 There can be only one!… Guy on the cover.

Every year there are dozens of films released to suck in the teen crowd, usually a bunch aimed at young boys, Fast and Furious, Harry Potter, Michael Jackson’s Moonwalker (Oops, take that one out.) and many aimed at girls, anything with a horse, anything with “princess” in the title.

In 1985 one such movie was called Highlander.

I think even those that don’t know about the movie have heard the oft repeated tagline “There can be only one”, usually said in a raspy voice for effect. That was the extent of my knowledge, in fact I have no idea if I even saw this before the other night, everything seemed new to me.

This is a prime example of a period movie even though I have no doubt it wasn’t intended, everything screams 80s. The outfits, the hair, even the Queen Soundtrack, which is pretty much the highlight of the film unfortunately. There are over the top fight scenes that move dangerously close to “cheesy” territory, car chases and a lot of showdowns.

Christopher Lambert is McLeod, a random guy at a WWE style match (need I remind you it was huge in the 80s?), he gets a “strange feeling” and wanders down to the deserted underground carpark. Normally this “strange feeling” might result in a meeting with George Michael or even Freddie Mercury, however here he runs into another similarly over-serious guy with a sword.

The ensuing fight involves a lot of flipping, sparks and grunting, and somehow a massive electrical surge that explodes a lot of cars and short circuits many lights.

Which is probably how a meeting with George Michael might go anyway, I’m not keen to find out.

By now most twelve year olds would probably be hooked, a sword fight, sparks and explosions do that to you at that age. I’m in my 30s and was already yawning.

The movie then decides to explain itself and we have a flashback to a bonnie old time in what must be Scotland, where the McLeods, Christopher Lambert among them, are having a feud with another rival family. The type of feud that necessitates an all in battle, though this battle was filmed more in the style of Blackadder than Braveheart, as the level of intensity and realism is very low.

An aside, when all families fight each other and don’t mix or get along, surely this leads to inbreeding? If you aren’t going outside your clan then it is inevitable that McLeod-on-McLeod action must be the answer, this can’t be good for the gene pool, and might explain why Scots never feature prominently at the Olympics?

I’m going to jump ahead here as I am already tired of explaining whatever plot it is they were trying to use to justify a lot of sword fights involving beefy meatheads.

Plot: Basically there are a bunch of invincible warriors who can’t be killed except by decapitation by sword, this leads to centuries of ongoing confrontations. How they come to be invincible I can’t remember, I don’t think it is really important. A guy named Victor Kruger (good Scottish name!) is the bad guy here and McLeod is the good guy.

The acting is atrocious, the dialogue laughable and the delivery of accents is worse than anything this side of Kev Costner in Robin Hood. Christopher Lambert is a French guy with a thick French accent who butchers every line he has, what is more amazing is that Sean Connery enters the film as a Spaniard (an Egyptian Spaniard! Don’t ask…), only he speaks in his own native Scottish accent without even attempting as much as an “ole”.

This is so over the top that it is basically Rocky 3 in skirts.

And why is Sean Connery in the film you ask? He basically is a plot device to explain to McLeod why he is invincible, he tells him he can’t be killed, that people will nonetheless try to kill him, shows him how to fight, and then gets killed himself. Maybe he should have listened to his own advice and laid low, but if he wasn’t there no-one in the audience would have any clue of what was happening.

I think the premise of Highlander is simple enough that it lends itself to a good action flick, only it wasn’t utilised well here. If ever there was a film that warranted a remake here it is, but I know they made a few sequels which I haven’t seen, so for all I know they have either wrung the premise dry or may have even made the best Highlander version possible already.

As it is the original Highlander is a showcase of lousy acting, shoddy SFX, hilariously “off” accents and obviously fake film violence. It has a super-cheesy ending and tried to be cool without ever achieving that goal.

And why is “Flashback” McLeod always clean-shaven?

Final Rating – 5.5 / 10. You might love this if you were an 80’s teen and remember it as you originally found it. If you didn’t see it then though all you will see is how crappy it is.