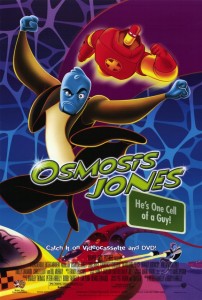 Live action and animated combos. There are a few films over the years that have tried to blend the two genres together with varying degrees of success.

Who Framed Roger Rabbit was a landmark, Space Jam introduced a generation of kiddies to basketball through the Looney Tunes characters and Babe sensibly limited the animated aspect to having the animals talk – something that continues to shit me but at least they did it well. In more recent times we have Transformers where even the live actors are cartoonish, and the Chipmunks films which… make money I guess.

Osmosis Jones was lauded as an adventurous and creative film for interspersing live action and animated sequences together to make one movie built around – and inside – one character.

We all know the human body is a disgusting place, with various emissions oozing, seeping and finding release in a variety of ways that would gross out the average adult (even though they all occur to us), and delight and amuse the average child (as they are not yet precious enough to pretend those functions don’t occur to them).

Frank (Bill Murray) is one of the more disgusting examples of humankind. He perhaps doesn’t do anything that the rest of us do physically, but he almost revels in his own grossness, burping, farting and gorging himself constantly, all to the detriment of his poor body, something that his young daughter is acutely aware of and concerned with.

That’s topside (in live action), equally concerned are the real employees of Frank, the millions of cells and microscopic beings charged with keeping him well by eliminating the germs, diseases and elements to which Frank is allergic. This is never easy, and becomes a lot less so when Frank casually invokes the ’10 second rule’ before he pops a boiled egg into his mouth that moments before was being sucked on by a monkey…

Now is probably a good time to mention that Frank is a zookeeper, so that above sentence is perhaps 5% more credible.

The monkey-spit-egg combo immediately releases a scad of new germs and unhealthy items into Frank’s bloodstream, and it is almost inevitable that once past his initial defences these new germs might prove hazardous to Frank’s health. Osmosis Jones (Chris Rock) is one of those charged with protecting Frank from these various germs and lurgies, but when he is unable to stop the initial incursion he teams up with a straight laced cold pill named Drix (David Hyde-Pierce) to eradicate the invading nasties and restore Frank to good health once again.

Not that Frank is of much assistance in this regard, he is basically carefree with his attitude to his own wellbeing, in one scene eating a science experiment oyster, in another drinking a morning beer to ‘keep his fluids up’. And all the while he burps, farts, snorts and vomits almost as much as often as he eats crap, which is a lot. 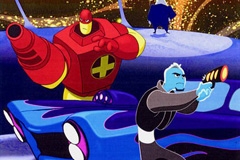 "Who you callin' cartoony?"

Yet unless you are say under twelve none of this was particularly amusing, neither were the ‘gags’ delivered by live action Bill Murray, Chris Elliott and Molly Shannon. The ‘inside Frank’ animated team didn’t fare much better despite a well-known voice cast, Chris Rock – as always – plays Chris Rock in his ‘performance’ as Osmosis Jones, apparently being Chris Rock is enough to get paid and Hyde-Pierce channels his own Niles Crane as the by-the-book Drix.

William Shatner does a little better as the mayor of Frank, though mainly because his own voice and cadence are pretty amusing to start with, but the only stand out was Laurence Fishburne as the nefarious germ master Thrax, a fiendish bug determined to help Frank kill himself from the inside out with a new super-virus he has dubbed the Red Death – something he hopes will be ‘bigger than Ebola’!

Fishburne’s performance and a single cell cartoon microbe is creepy and slimy, and was the only one where you didn’t know within seconds that ‘yep that’s Chris Rock alright!’. Proof that decent actors are superior even when you can’t see them…

Osmosis and Drix find themselves traveling all over the inner parts of Frank, providing the only elements where any semblance of creativity can be found in the various puns and ‘sounds like’ names of places and things.

As mentioned before there aren’t many jokes that elicit more than a guilty chuckle, usually involving an unfortunately timed bodily function – now might be a good time to mention Osmosis Jones was directed by the Farrelly Brothers – and the action scenes are hardly action packed. Even the animation is reasonably straightforward and uninspired.

What remains is an eighty minute ‘don’t eat crap kids’ lecture targeted at sub-teens featuring no-one that any sub-teen would recognise either in flesh or by their voice, and without sufficient justification to impel them to change their ways: “Oh you’re telling me that if I eat junk and burp and fart that when I get to Bill Murray’s age I might get a little sick? What is he a hundred? I’ll stop eating junk in about ninety years then!”

For the rest of us past the dozen it results in 80 minutes of ennui, with possible additional guilt if you are wolfing down a pizza and/or sixpack as you sit through this, but with precious little entertainment value to speak of.

Final Rating – 5 / 10.  Another example of my favourite two word description lately – creative mediocrity –  though to be Bill Murray… I mean Frank, Osmosis Jones is also lacking in creativity too. I can provide my own fart and burp jokes thanks without ever leaving my chair…